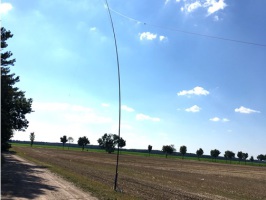 An Ultra-Lightweight, 7-Band antenna, perfect for portable outings like this one. 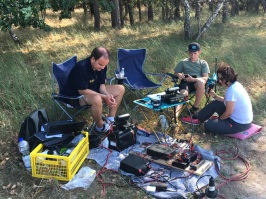 And Peter, DL4LAM (not shown) operating the camera.

I bought  this antenna more than one year ago, but had no opportunity to use it.
Recently at WRTC-2018 in Wittenberg, it was time to check it out.

After assembling several WRTC Spiderbeam antennas at various sites as a volunteer, finally we (me, accompanied by Hava, DO5HO, and Christian, DL6KAC) had time to build up the 404 UL on a 12 m (40 ft) Spiderpole in the field ( about 2 km away from closest WRTC site).

Assembly was quick and easy, low wind load and no guying was required.
Matching unit approx. 11 m above the ground, the ends around 3,5 m above
ground level.

During the WRTC/IARU, we worked several Y8 [WRTC] stations in the neighborhood and sometimes could log contacts faster than our professionell competitors.

SWR on all bands is very good.

It´s a good antenna, worked very well and the weight is very low.  Easy to transport.