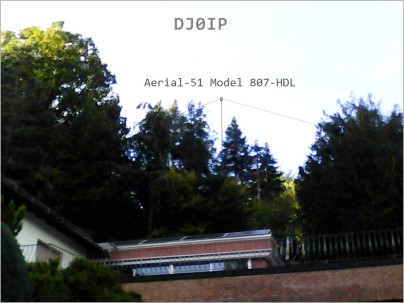 Reason:  I am using an un-guyed fiberglass  tele-scoping pole as a support for the antenna.  But the pole is a special version: a  Spiderbeam  fiberglass pole, 26m long, but shortened to about 14m by removing several of the top segments.   Since it is not guyed, I wanted to keep the weight of the antenna as low as possible.

Previously, I was using an 80m OCFD antenna similar to the 807-HD, with its feedpoint located 20% from one end and situated much lower on the mountain that our house is built on. 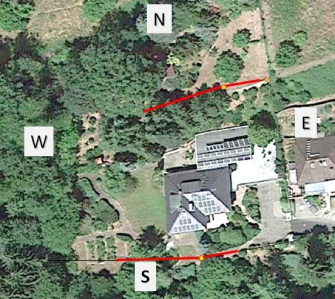 The antenna up the hill and to the north is the new 807-HDL.

The antenna south of the house is the old 80m OCFD.

The base of the new antenna mast is higher than the roof of the house.  The antenna is about 13m above that.

The roof of the house is a little higher than the feedpoint of the old antenna.

The building behind the square house is an indoor swimming pool.  There are no consumer products in that building, but there are Solar Panels on its roof.  The Solar Panels and associated electronics are quite old and were Made in Germany.

"NOISE" is a big factor these days and the expectation was that moving the antenna farther away from the house would decrease band noise on my receiver.

Initial tests indicate about 2 S-Units lower noise on 80m, 1 S-Unit lower on higher bands, except 30m.  On 30m I have about S6 to S7 noise on the old antenna; S1 on the new antenna.

Angle of Radiation:  The hill near the house has about a 40% slope.  The hill above the house flattens out, with a slope of about 30%.  This enables a lower angle of radiation to clear the top of the mountain.

Inital tests on 20m and 15m seem to show an average improvement on long haul DX to be about 2 S-Units, despite the much longer run of coax.

Visibility: The old antenna is located near the street and all visitors cleary see it.  It is quite conspicuous.  The new antenna is not spotted from the street, but clearly visible in our driveway, if one knows where to look (i.e., over the garage and up the mountain).