After having measured 807-xx antennas in the field at least 30 or 40  times, I know what to expect when I measure one.

On 20m, the SWR curve with 2 wavelengths of RG58 AU attached normally looks like this: 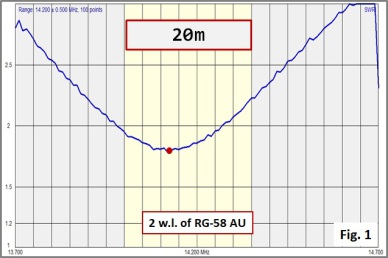 Notice that the SWR is under 2:1 for most of the band, rising to about 2.3:1 at the high end of the band.  This is how it almost always looks.

Next, I scanned the SWR curve with the 14m of Airborne-5 Coax running down the pole from the antenna.  This is position (2) 'Mast' in the drawing below.   It too looked good, but only at first glance: 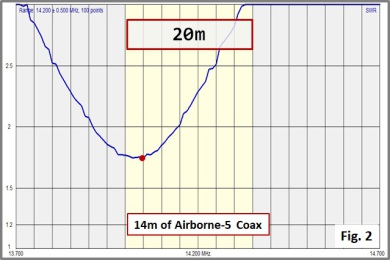 The SWR curve was 'almost' OK there.  The frequency of minimum SWR had fallen slightly, and the shift caused the SWR at the high end of the band to be >3:1.  This is not good.

Never-the-less, I continued and measured the antenna again at the next junction of coax (3) on the terrace: 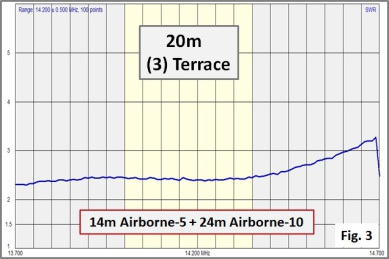 Clearly there was Something Rotten in Denmark!

So let's first take a closer look at the coax between the antenna and the house.  It consists of 4 pieces of coax:

Note that the shield grounds at this point.

I inserted a 1:1 Maxwell Choke between the coax and the rig.

I should have been suspicious of the measurements at (2), because a shift in the frequency of minimum SWR is one of the negative effects caused by Common Mode Current.  Instead, I ignored it and hoped for the best.

After measuring the SWR at position (3), the terrace, I knew something was dreadfully wrong; but what?  The Double-Dip in the SWR curve did not appear with the 1 MHz scan (Fig. 2).  I didn't detect it until I ran a 2 MHz and 3 MHz scan, but then it was apparent. 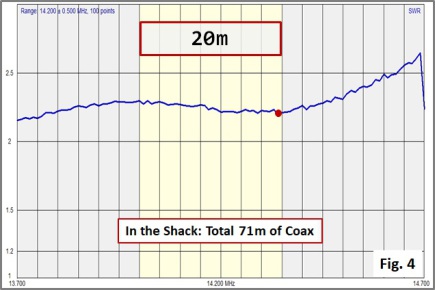 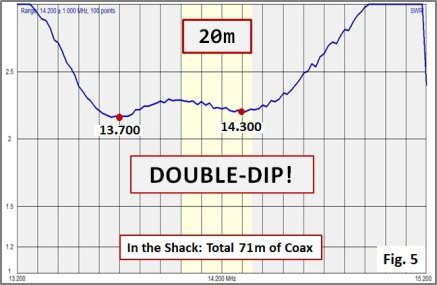 I began this section by stating that I have measured these antennas 30 or 40 times.  This is fact, not exageration.

Although I have never seen this this Double-Dip before on this specific antenna, I have seen it before!

I was fairly sure this was being caused by

Common Mode Current on the feedline.

All curves on all 3 pieces of coax looked nearly identical on the classic HF bands as well as 17m.  The 30m and 12m curves changed considerably due to transmission line transformation - which was to be expected.

The Obvious:  the problem is due to this specific length of coax.

But wait, I also had this problem in the shack, which is not a multiple of a half wavelength of coax on 80m.