Here again is the layout around my hourse, showing: 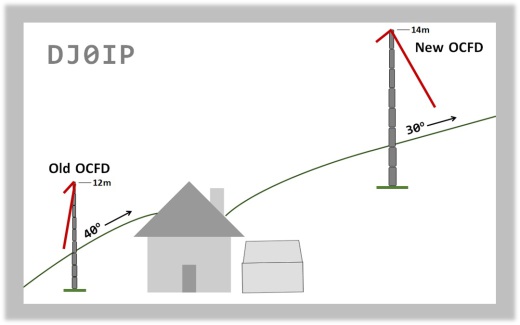 Besides being located farther away from the house and in the clear, this new antenna also enjoys a lower take-off angle for clearing the top of the mountain (i.e., New Ant.: 30 deg.;  Old Ant.: 40 deg.)

IN THE A/B TESTS BELOW:

Although in theory a major CW DX contest is a great opportunity to test antennas, it turned out to be a very difficult task, for several reasons:

On several occasions, I simply gave up and did not record the station because it was impossible to be sure of the results.

Noise really was not an issue in the contest.  The only thing I distinctly observed was that the noise level on 15m was S1 on the old antenna and S0 on the new antenna.