THIS  PROJECT  HAS  BEEN  CANCELLED.

See bottom of this page to read why.

(An alternative is in preparation)

The Off-Center-Fed Dipole (OCFD), often referred to as a "Windom", is an interesting multiband antenna covering its fundamental frequency (band), and all 'even' harmonic bands.   'Odd' harmonic bands are not covered.

It was found that a low SWR on the 15m band could also be achieved by changing the position of the feedpoint:

FOR MOST USERS, especially those who do not work CW, the choice was simple: 29.7% split.

The recent popularity of Digi-Mode "FT8" has sparked interest in the 30m band, especially during periods of low sunspot activity.

This leaves users with a choice of 20% or 29.7% splits; each losing one of the WARC bands.

Serge, ON4AA has designed an interesting alternative: the "CL-OCFD".

This antenna has a low SWR on 6 bands, achieved by using a combination of series capacitor and inductor, inserted at the center of the antenna.

low SWR (at the feedpoint) on ALL 8 bands!

Note: The new 60m band is not [yet] addressed with this antenna.

This antenna is under development.

In the meantime we have just erected and tested the dual-radiator version and initial results are encouraging.  Some minor tuning is still required. 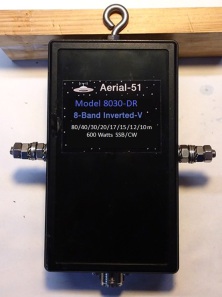 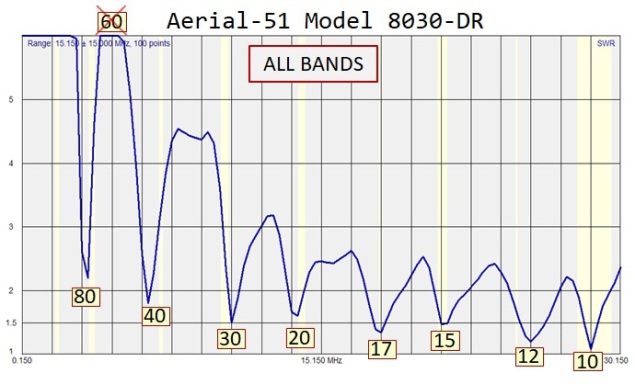 This was accomplished just with 2 wires; no traps! 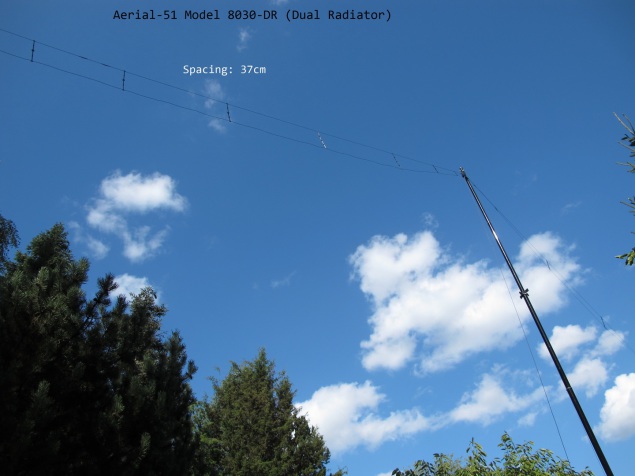 The "thing" near the left end of the upper radiator wire is an RMU-0.  This is a removable object, currently just 25cm of wire, but may be replaced with one of 4 standard Aerial-51 RMU's, enabling placing minium SWR on 80m in different segmets of the band.

(This is not your Grandfather's Windom!)

THIS PROJECT HAS BEEN CANCELLED; IT DID NOT WORK

To understand why the Dual-Radiator OCFD antenna does not work, we first need to agree on a new term I call SWRmin.

SWRmin stands for The Frequency at which the Minimum SWR Occurs on the Band.         Its value is stated in MHz, not as a level of SWR.

The OCFD is almost a harmonic antenna, but not quite.  Due to differing effects of End-Effect on the different bands, SWRmin skews slightly upwards with higher bands. The rate of skew is approximately 1.5 to 2.5%.

Setting 80m SWRmin at 3.450 MHz produces a good compromise for all of the HF bands.

In any case, we know how a typical OCFD should behave on its fundamental and harmonic bands. Now let’s look at the dual-radiator OCFD.

As can be expected, mounting two antennas (radiators) so close together creates a lot of interaction between the two, resulting in a need to re-adjust their lengths.

This is no problem for center-fed dipoles, because each dipole only works on one band.  Each band’s dipole length can be adjusted separately, enabling a good match on both bands.

With the OCFD, each radiator is responsible for multiple bands.  Adjusting lengths to compensate for the interaction would theoretically work, if and only if all bands were affected equally.   Unfortunately, this is not the case.

Obviously, any adjustment of wire lengths to improve the 40m band would degrade performance on several other bands.  The antenna could then be used, but an antenna tuner would be required on several bands, which defeats the purpose of the dual-radiator OCFD.

The dual-radiator OCFD does not work with its two radiators in parallel unless you use an antenna tuner.

Other single-radiator 80m OCFD antennas (i.e., 20% split; 29.x% split) also work all bands when using a tuner.  Thus, there is no need to add the additional complexity of the dual-radiator.

The classical 80m OCFD with its 33.3% split should not be used on 30 & 15m because the antenna’s SWR at the feedpoint on those bands is so high that damage may occur if used there.